Amazing article about 4 of my favorite things:  Dave, Lemmy, guitars and The Young Ones.

This blog straight up jacked from www.guitarnerd.com 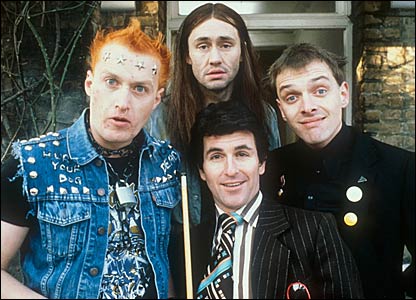 This is another guitar that I missed out on that still haunts my dreams and makes me wake up in a cold sweat…screaming “WHHHHYYYYY?!”

In a previous post I talked about how I found my awesome Randy Rhoads polka dot flying V. While I cherish this guitar and will never, ever sell it, buying it came at a great price. A little background story needs to be said here. Growing up, me and my brother were probably Australia’s biggest fans of the TV show The Young Ones. I’ve been watching the show since 1984 and have seen every episode probably over 100 times. We can quote every episode line for line. SPG and Vyvian were our idols. Rick was spelt with a silent P. Mike was a weird creepy dude I didn’t find funny until I was about 16… then I got him. Neil was a hippy who loved lentils and smelled really bad. The show was genius.

Anyway, while I was on the phone talking to the owner of the Rhoads PDV (Buddy), he mentioned he had another flying V for sale for the same price.

He then told me how his band supported Motorhead on their ‘84 Australian tour. One day they were all crowding around a small TV in their dressing room, watching the episode of the Young Ones where they were playing Ace Of Spades. They hadn’t seen it yet, so to sit with them while they watched must’ve been hilarious.

At the end of the tour, Buddy asked the guitarist if he wanted to sell his custom V. This V was custom made by an english luthier. It had triple gold humbuckers, ivory binding and sharp points. “Sure, why not”. Done and done. Below is a photo of Buddy’s collection with the Motorhead V second from left. 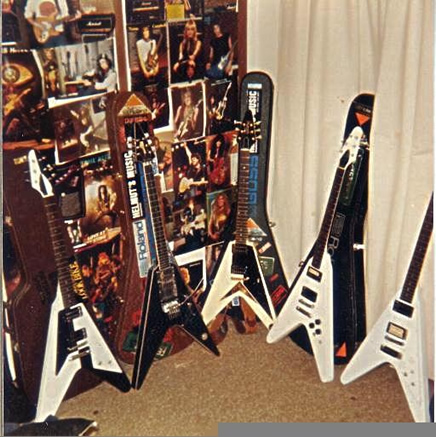 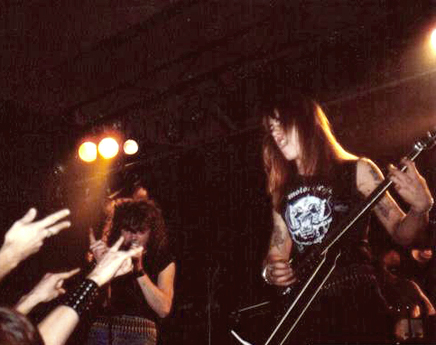 And here’s Buddy playing it live…

So, this  was the guitar from my most favourite episode of my most favourite TV show. One of a kind.
And so 10 years later Buddy was offering me either the Randy Rhoads polka dot V or the Motorhead V for $1200.

As I’d been chasing a polka dot V for so long, I went for that. I only had money for one guitar, though I really wanted both.

So for the next 15 years I wondered what happened to the Motorhead V. Did Buddy still have it? Did he still live in Melbourne? And most importantly…. would he still want 1200 bucks for it?!

Then late 2008, I was posting on the Randy Rhoads forum. Someone had asked about Fernandes polka dot V’s and I posted info and photo’s of mine. A fellow poster asked if I used to live in Griffith and if I’d bought the guitar from Melbourne… holy shit… it was BUDDY!

First thing I asked him is if he still had the Motorhead V.

Photos and article courtesy of www.guitarnerd.com